In winter we sometimes have to depart from a snow or ice covered runway. When take-off performance is calculated this in general leads to a low V1 value to cater for accelerate-stop performance. 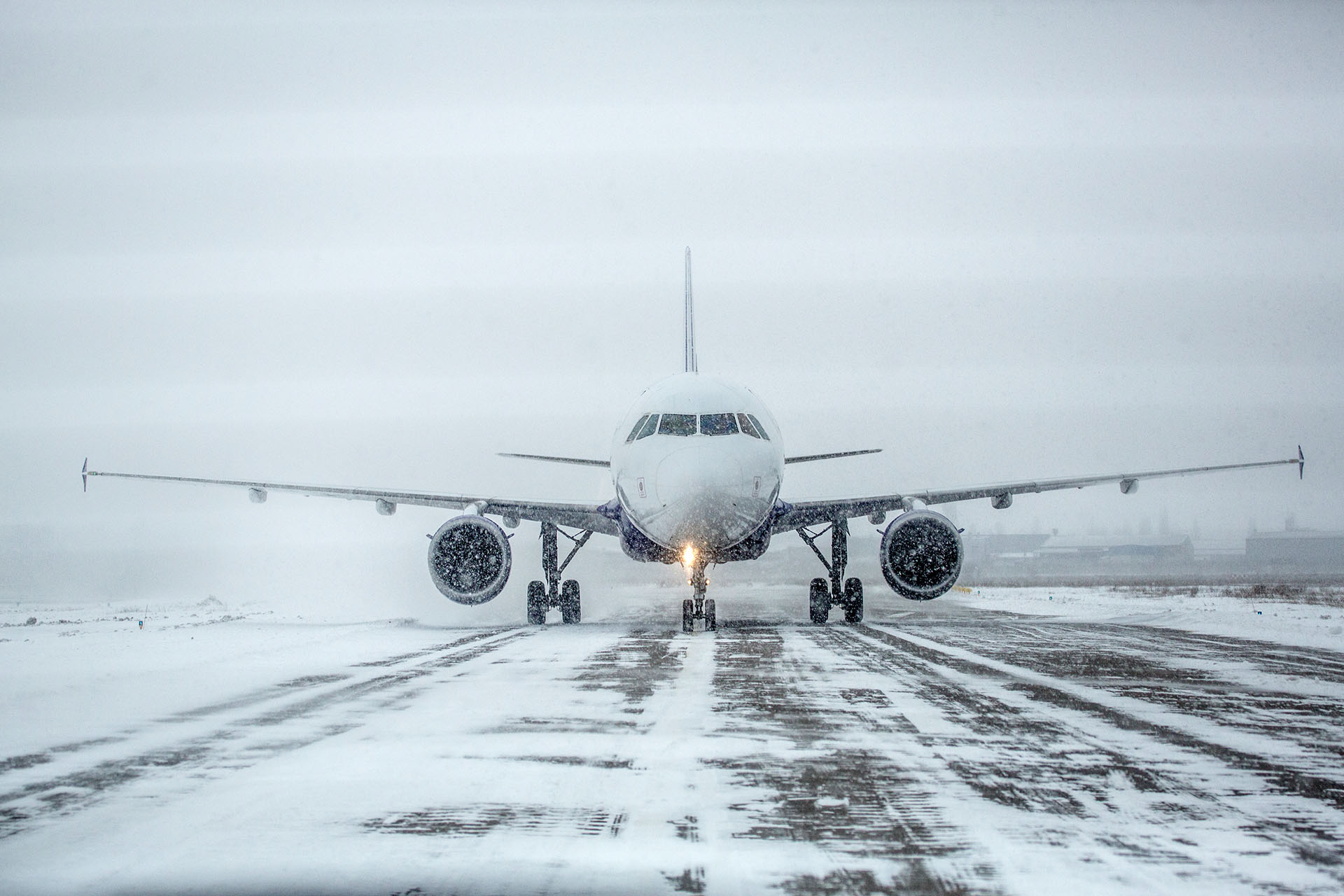 When I was flying the B737 for my company I noticed, after we transferred from ‘paper’ to computer performance calculations, that the V1-values on slippery runways were nearly always a few knots below the minimum values in the V1(mcg) table in our FCOM (Flight Crew Operations Manual). Knowing how Vmcg (Minimum Control Speed Ground) is established, in the certification phase of an aircraft on a dry runway, I doubted if these values were safe. With the help of Dutch ALPA we addressed this flight safety issue to our company. As our company initially was reluctant to change the performance software (there was no legal requirement to do so) it has led to an investigation in the safety of low V1-values on slippery runways and the properties of computer performance software.

A research was conducted at Delft University of Technology. This research consisted of combining a digital aircraft model based on the B737-300 with a ground model based on NASA-measured runway friction data. An engine failure was simulated at different speeds. The research confirmed that Vmcg-limited V1 is not a safe V1-speed to use on slippery runways. [ref. 1] Based on this research a margin on Vmcg limited V1 of 6 to 10 kts, depending on aircraft model, may be enough to assure controllability in a Continued Take-Off (CTO) on a contaminated runway, even in crosswind conditions.

At the time this research was conducted the Federal Aviation Administration (FAA) also recognized the issue. They issued AC 25-31 concerning contaminated runway operation. In Par. 8.5 can be found: "Minimum V1 and/or crosswind guidance may need to be adjusted in consideration of the reduced controllability following engine failure on a contaminated runway [Ref. 2 § 8.5]."

Why did we get V1 values as low as Vmcg-limited V1 from our computer calculations?

In 1993 the FAA, together with leading aircraft manufacturers, presented the Take-Off Safety Training Aid (TOSTA) [Ref. 3]. The TOSTA was developed in reaction to an alarming number of over-run accidents and incidents in rejected take-offs (RTO). Among other things, the TOSTA recommended that operators should consider using reduced V1 techniques [Ref. 3 § 4.3.6.8], thereby decreasing the likelihood of over-run accidents or incidents. Based on these recommendations many aircraft operators, including ours, chose to implement the V1-min policy for contaminated runway calculations in their computer performance software. This policy turns out the minimum allowable V1-value, in most cases this is Vmcg-limited V1.

What is the risk of using Vmcg-limited V1 on a contaminated runway?

If an engine failure is recognized at, or close after, V1 we are supposed to continue the take-off. Should an engine failure be recognized, on a contaminated runway, close after Vmcg-limited V1, rudder authority, in combination with achievable side force on the tires, is not yet sufficient to steer the aircraft back to the centre line [Ref. 1]. This will most probably lead to a situation where crews are forced to reject their take-off after V1, from a destabilized state, to avoid a sideways runway excursion (Veer-Off) at high speed. Rejecting a take-off after V1 is a major contributor to RTO-accidents [Ref. 3 § 2.2.4]. In these cases chances are high that the crew will be blamed for the accident because they rejected after V1. The causal controllability problem may remain concealed.

To show compliance with regulations aircraft manufacturers deliver their aircraft with an Aircraft Flight Manual (AFM). The certificated performance data is nowadays delivered as a digital database: AFM-DPI (Digital Performance Information). There is a standard on how to calculate performance figures from AFM-DPI. The manufacturers of performance software use Standardized Computer Aircraft Performance (SCAP) modules in their computer programs. It is up to the aircraft operator to select a policy on how to use the output of the SCAP-modules within the legal requirements.

For contaminated runway operation, the use of full rated thrust is required by the regulations. If performance is not limited this will result in a range of V1-values that comply with Aircraft Flight Manual (AFM) requirements. At the low side V1 is restricted by Vmcg-limited V1 or by accelerate-go (Continued Take-Off). At the high side V1 is restricted by accelerate-stop (Rejected Take-off) or Rotation speed (VR). 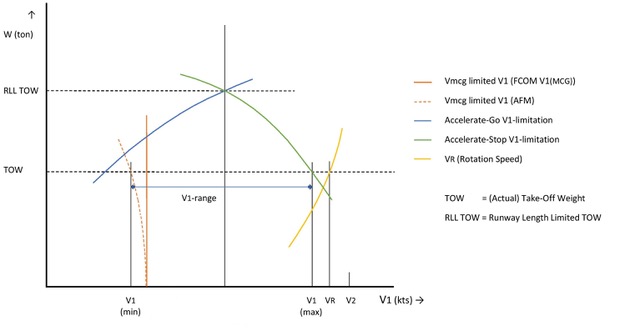 Figure 1 shows that the V1-min policy will turn out a V1 equal to the Vmcg-limited V1 when V1 is not limited by accelerate-go. On slippery runways (no contamination drag) this is nearly always the case. The dotted orange line shows why computer performance calculations based on AFM data will give lower Vmcg -limited V1-values than the FCOM V1(MCG) table (solid orange line) that has no weight correction. V1-values at the left (low) side of the range will provide margin on accelerate-stop performance and also statistically reduce the chance of a rejected take-off as intended by the recommendations of the TOSTA. To optimize safety a margin to both the Vmcg-limited V1 and Accelerate-Stop performance is required.

Below several V1-policies are listed with considerations on their properties.

What is the best V1-policy to use on a contaminated runway?

The V1-min policy will turn out V1-values that are unsafe for nearly every Take-Off. With help of Dutch ALPA we managed to change the policy of our company into the V1-mean policy. A major American air carrier also changed their policy from the V1-min policy into the V1-mean policy after safety concerns of pilots. They take the V1-value at 25% of the range to use for their contaminated runway take-offs. A Dutch charter company uses the V1-range policy. The balanced V1 policy can offer a margin to Vmcg-limited V1 depending on aircraft type. If performance software turns out V1-values equal to Vmcg-limited V1 it is better to choose the V1-mean policy.

Using one of the safer policies will not guarantee a safe V1-value for every take-off. When you are performance limited the software may still turn out a value close or equal to Vmcg-limited V1. This will only change if a legal requirement to use a margin on the Vmcg-limited V1 is instated.

Vmcg-limited V1 is not a safe V1-speed to use on slippery runways. The risk was significantly increased through the introduction of computer performance calculations resulting in lower V1-values. Computer performance software using the V1-min policy, or the balanced V1-policy for some aircraft types, will turn out a V1-value equal to the Vmcg-limited V1 for nearly every contaminated runway take-off. In these cases it is safer if your company chooses another policy.

In this example the computer performance V1 is below the minimum values in FCOM. This deteriorates the situation as using the value from the FCOM would already be unsafe on a slippery runway. 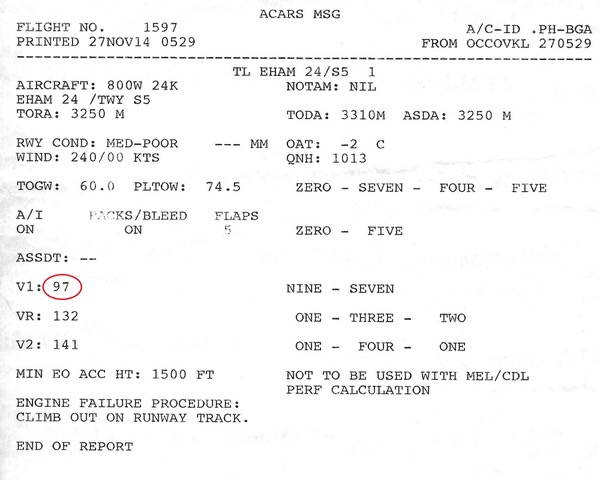 In this example the computer performance V1 is, with some margin, above the minimum value in FCOM. This is a safe situation. 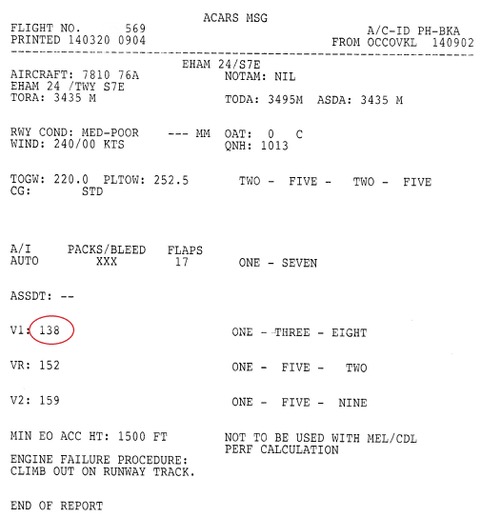 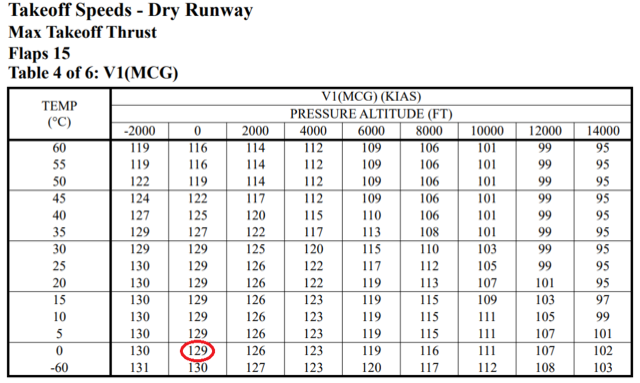